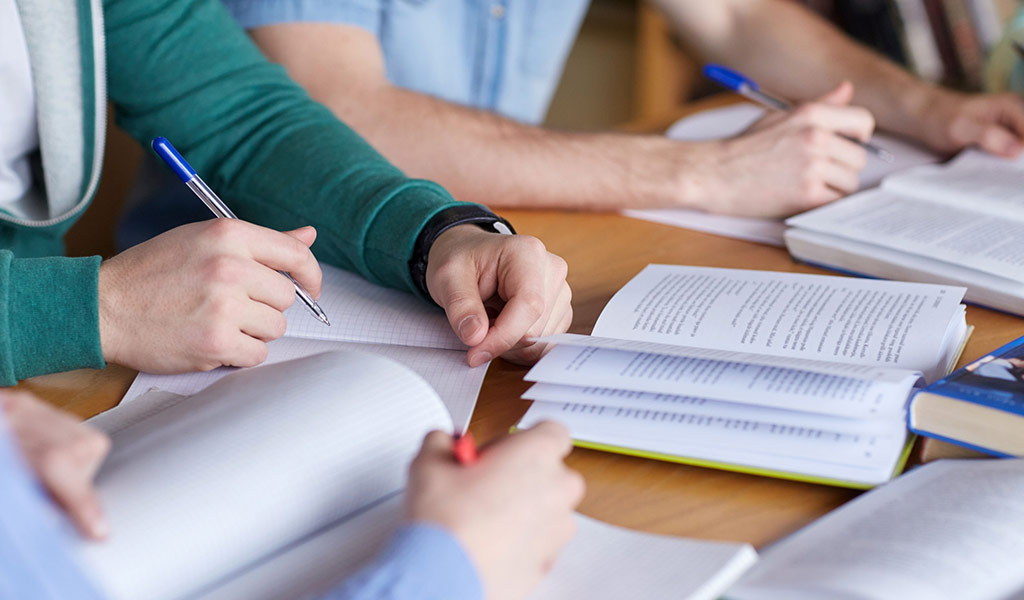 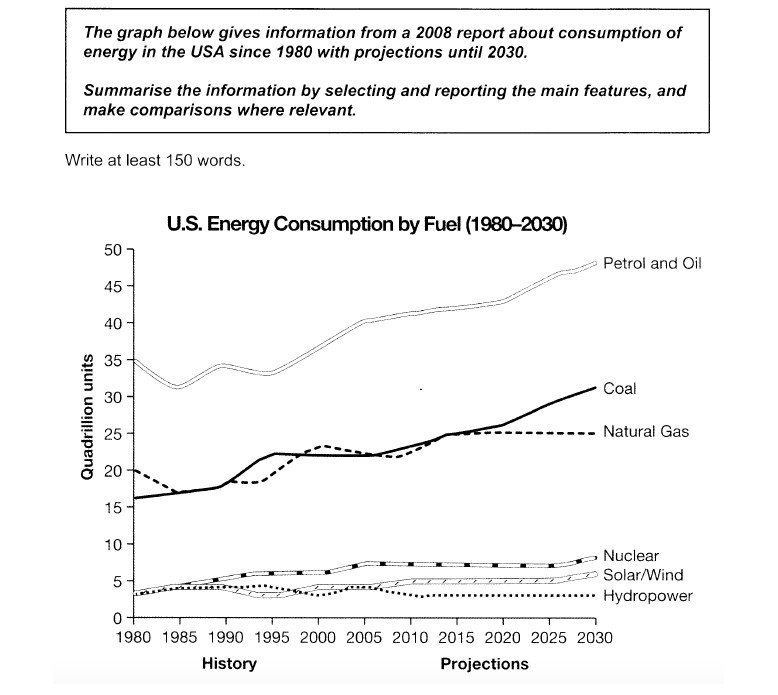 【Task 1 Topic】
The graph below gives information from a 2008 report about consumption of energy in the USA since 1980 with a projections until 2030.

Summarise the information by selecting and reporting the main features, and make comparisons where relevent.

This graph chart illustrates the variations of six sorts of energy, namely petrol and oil, coal, natural gas, nuclear, solar/wind and hydropower, which used in America from 1980 and makes a prediction (What is the subject of this? Energy sources cannot make predictions!) until 2030.In general, the consumption of petrol and oil topped the chart from 1980, and it will be remained the largest group in 2030, according to the projection of this graph.

The quadrillion units of petrol and oil was 35 from 1980, and after 2005, the consumption was steadily increased steadily. In 2030, the use of fuels will reach 50 quadrillion units. The consumption of coal and natural gas was slightly fluctuated slightly from 1980 to 2010, then which revealed a continuous ascension (not clear) after 2015, while natural gas used to (?) keep the same proportion.

The use of nuclear, solar/wind and hydropower was were merely about 4 quadrillion units from 1980. After 1985, the use of nuclear power demonstrated a slightly riese to approximately 7 quadrillion units, it will be projected to remain the same proportion in 2025. From this graph, the consumption of nuclear, solar/wind and hydropower were the least important which with each proportion reported to will be 7,5 and 3 respectively in 2030. 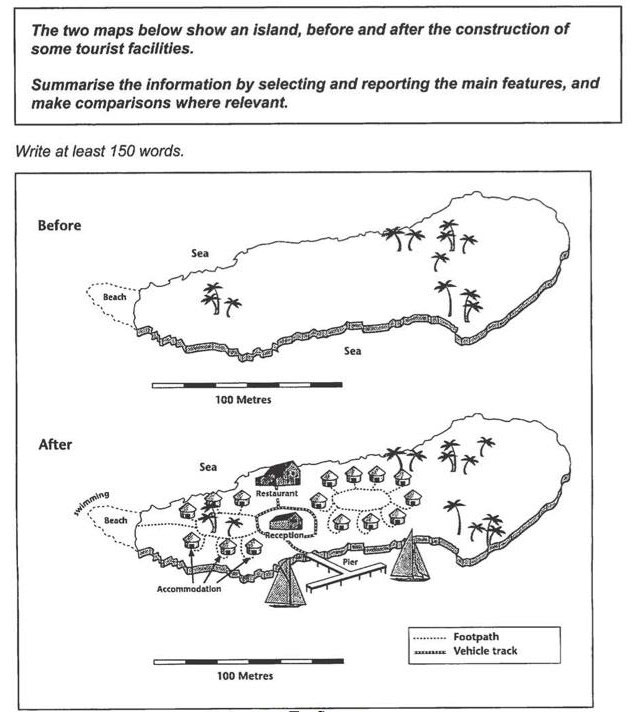 【Task 1 Topic】
The two maps below show an island, before and after the construction of some tourist facilities.

Summarise the information by selecting and reporting the main features, and make comparisons where relevent.


The two diagrams illustrate the development onf the anisland, mainly for the tourism purposes.

In general, the changes to this island are characterized by the accessibility and accommodation for visitors, as well as several new roads added for people and vehicle to use. Good overview.

The most apparent alteration is the construction of buildings and facilities. In the middle of this island, there is a reception situated in front of a pier where tourists can take boats to come arrive by boat. To the north of the reception is a restaurant, and these two buildings are surrounded by some houses which visitors can settle in.

There are also some paths added for travelers to trek. These footpaths are linked to each accommodation and stretch to the west of this island, where a beach stands to offer visitors an area for entertainment of swimming. Besides, a track which encircles the reception and leads to the restaurant and pier makes it more convenient for people to drive on. 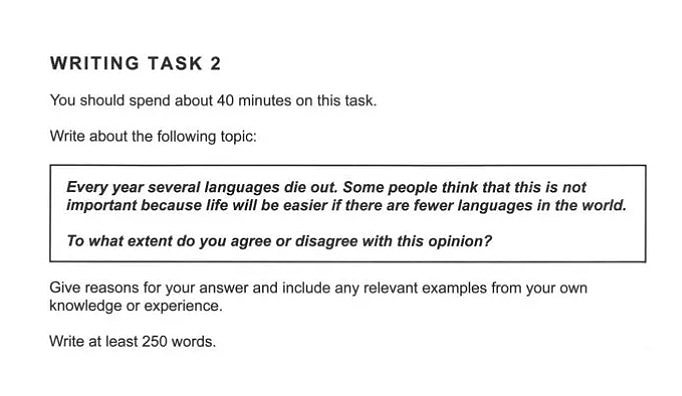 【Task 2 Topic】
Every year several languages die out. Some people think that this not important because life will be easier if there are fewer languages in the world.
To what extent do you agree or disagree with this options?

With the extinction of some lesser-used languages, it seems that people have been inclined to speak some specific languages. Would it really make individuals to livein an easier life? This essay will elaborate both of views. Don’t ask questions in academic writing. Indicate your opinion to let me know what’s to come.

In the ancient period of time, there were diverse of populations with their unique mother tongues. For instance, there were a lot of aboriginal tribes with using their own native languages in the world. What the merits are to enhance social cohesion since only the same population speaks one unique language. In addition, the diversity of languages use also includes the cultural identities and values. According to some cultural experts and anthropologists, those who speak their native language well are much more respect and appreciate their ancestors.You need a concluding sentence saying the language can help people preserve their cultural heritage.

However, with the revolution of transportation and communication, opportunities of interacting with foreigners are rose have risen. One might argue that it will be much more convenient and efficient to contact with others with fewer languages as one can lower save the time to guess the real meaning from a person speaking a different language whom one is talking to.Furthermore, since there are fewer languages spoken, tourists do not need to spend time learning extra native languages when they circumnavigate around the world.

As is known to all, there are fewer a few languages have replaced some lesser used ones to become the mainstream language in those countries domestic. Despite the university utilization, I would still prefer to learn other tongue, even they are lesser used, since to understand more different words and sentences sometimes would make me feel more confident myself. You should NOT express this in the conclusion! This needed to be in the main body! What's more, through the learning, I could discover different cultures and broaden my horizon as well. Owing to these reasons, I do not totally agree that if there are fewer languages, we could live in an easier way. 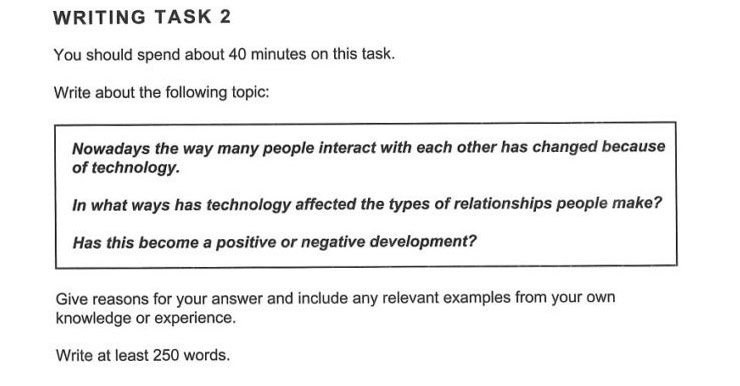 【Task 2 Topic】
Nowadays the way many people interact with each other has changed because of technology.
In what ways has technology affected the types of relationships people make? Has this become a positive or negative development?

In the modern society, high-developedadvanced technology has a huge impact on how people contact and interact with others. Although technology does bring us some benefits and cause positive changes, drawbacks still exist indicate in it what the drawbacks are.

There is no denying that technology provides us with convenience. People can easily talk to their friends by just picking up the phone or typing a few words on the little mobile screen, without the concern of distance between them or how hard it is to meet each other in person due to their busy schedules business. The advent of the Internet also gives us more opportunity to make friends with new unknown people beyond the border of countries through social media or some dating applications. The development of technology achieves something incredible which could not have been cannot be imagined in the old days.

Nonetheless, advanced technology doesn't always affect people in a positive manner. Too many means of connection with friends sometimes make people become careless to maintain their friendship or pay less attention to keeping a nice relationship. The further consequence is that people tend to find more new, quick and easy relationships rather than repairing the old ones when they have some problems with their friends. What's more, without the face-to-face interaction, it is hard to tell whether the people we know on the website are is good or not. Too vague. What do you mean?

In conclusion, while we take benefit from the advantages of technology, have the awareness of the underlying risks when using it and we must do not let the development of the technology change our behavior or forget how to cherish a sincere relationship.